What is EARPA?
Mission and objectives
New EARPA Structure
Our Activities
Our Membership
Our Organisation
Executive Board
Former Board members
Privacy Policy
Code of Conduct

EARPA is functioning thanks to its members' annual contributions and is composed of three main bodies:

The organigram gives an overview of the interaction between the various bodies within EARPA. 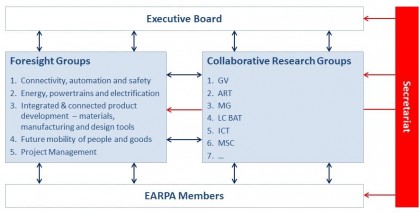